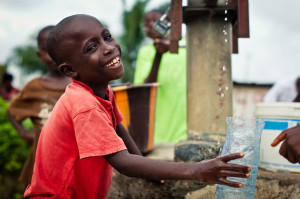 Environmental advocacy is hard work, challenging, often discouraging and requires drawing, when possible, on deep reserves of perseverance and resilience.

Environmentalists often contend with enormously powerful industries –  forestry, agriculture, oil and gas, etc — and with powerful government interests. Both industry and governments have enormous resources at their disposal while environmentalists are often poorly funded, or unfunded, and have few available resources.

In the face of such power and with a long history of losses at the hands of that power, it is easy for environmentalists to feel discouraged or hopeless and for impacted communities to feel dispirited and believe there is little they can do to effect meaningful change. We believe that a human rights approach can help.

A human rights approach is a moral appeal to parties to do the right thing, based on broadly recognized standards of just behavior expressed in internationally recognized human rights declarations, covenants, conventions and charters. (This moral appeal may also at some point be backed up by human-rights-based legal action.) We view the standards expressed in the Universal Declaration of Human Rights and the declarations, covenants and conventions that arose from it — those on the rights of women, rights of children, rights of indigenous peoples, etc — as broadly endorsed public expressions of moral norms.

Some powerful tools a human rights approach can use include:

Telling the story. Simple, clear personal accounts of direct impacts that environmental assaults have had on individuals, families and communities can be collected, documented and publicized. This “situated knowing” of personally impacted witnesses helps to awaken moral imagination and to evoke the compassion and outrage necessary for change. Claims of injury or harm in these stories may need to be substantiated by reference to scientific studies and/or expert testimony, just as the moral intuitions about right and wrong will be substantiated by reference to human rights norms.

Claiming moral authority. Providing advocates with well researched Human Rights Impact Assessments for their specific situation can help clarify the moral values at stake. Foregrounding and documenting human rights standards particularized for that situation can publicly validate the felt sense of injustice and can legitimize the sense of outrage experienced by those whose lives have been directly impacted. EHRA’s primary work is just this: evaluating the human rights dimensions of environmental projects undertaken by private industries and governments, and preparing HRIAs for them and for environmental organizations working with them. These HRIAs are detailed, documented and specified to the particular situation. They identify which human rights norms are applicable, in what ways they are applicable, what liabilities that project could be facing and what measures that industry or government should take to reduce those liabilities and meet their human rights obligations.

Exercising moral power. Community led public Inquiries, such as New Zealand’s 2006 “People’s Inquiry into the impacts and effects of aerial pesticide spraying over urban areas of Auckland,” and public Tribunals like the Permanent People’s Tribunal Session on Agrochemical Transnational Corporations (Bangalore, India , December 2011) can be both educative and powerful. Both formats, Inquiries and Tribunals, are community-initiated and led (not government-initiated), and can be structured to insure that the voices of those who have been impacted are adequately heard, acknowledged and entered into the public record.

A human rights approach also has some practical advantages:

It provides a somewhat novel reframing of environmental issues, focusing on the broadly endorsed moral and human rights norms at stake.

It reduces the problem of moral relativism. Whenever ethical questions are under discussion the problem of moral relativism raises its ugly head: “There are different moral norms all over the world, who’s to say what’s right or wrong, one person’s good is another person’s bad,” and so on. With the emergence of the Universal Declaration of Human Rights, though, all that changes a bit simply because of the moral authority that attends the unprecedented widespread public endorsement of these standards. The UDHR represents the first time in history that a document about moral values has been conceived, written and endorsed by representatives of virtually every nation on earth. The UDHR, and the covenants and conventions that have followed from it, have a uniquely broad and powerful moral standing across the world in such a way that invoking human rights norms as moral standards may not be dismissed quite as readily as invoking other moral standards whose appeal may be more limited to certain groups or worldviews.

It thinks from the bottom up. With the emergence of the modern human rights movement we have begun to see things from the “situated knowing” perspective of those who suffer the abuses, and not just from the standpoint of the corporations or government regulators who are inconvenienced by that suffering. As Dietrich Bonhoeffer has said “We have for once learnt to see the great events of world history from below, from the perspective of the outcast, the suspects, the maltreated, the powerless, the oppressed, the reviled – in short, from the perspective of those who suffer.” The modern human rights movement expresses and foregrounds the moral dimension of how things look “from below.”

It has less ethical “slippage,” i.e., less room for the questionable interpretability that many ethical systems are heir to. Practical wisdom (“prudentia”) is the virtue of making wise practical choices when taking that existential leap from general ethical principles to specific action those principles should call for.

A human rights approach to environmental issues has less ethical slippage because the ethical standards in human rights documents — the “right to free, prior and informed consent,” for example — are much more specific than the more general principles found in other ethical systems.

It appeals to compassion. If Schopenhauer and Buddhism are right, compassion is the primary, or perhaps sole, motivator for ethically meaningful action. Schopenhauer and Buddhism see compassion as ontologically grounded; others see it as biologically or genetically grounded. In either case the experience of empathic connection with the suffering of others is in some deep way fundamental to human experience. And it is the human rights tradition, particularly with its high regard for the importance of personal narratives, that evokes and foregrounds the experience of compassion.

It is educative. A human rights approach, even when it does not completely succeed in accomplishing the intended goals of its current project, can still serve to educate people both about the current issue and about the value of human rights norms in general.

It provides an effective vocabulary. Human rights discourse provides a long established and powerful vocabulary for dealing with moral issues of this sort. A 2007 public opinion survey found that human rights language had broad public appeal, and a subsequent document based on that study, Talking Human Rights in the United States: A Communications Toolkit, provides recommendations and best practices for promoting human rights in the US.

It helps with despair. Environmental advocacy can be discouraging and overwhelming. A human rights approach can help with the feelings of hopelessness and futility when going up against the very powerful because that is exactly what it was designed for. Rightly used it can effectively foreground the personal human impacts of human rights violations and can empower communities to take initiative even when regulatory agencies will not.

And sometimes the power of personal narratives, combined with a formal human rights report addressed to the relevant industry or agency, just simply works. A small community on the Oregon coast, for example, was facing a proposed aerial pesticide spray immediately adjacent to their city boundaries and near schools and neighborhoods, despite community opposition. The community commissioned a human rights assessment and asked that it be addressed to the forestry company that was arranging the spray. Shortly after the report was sent, the company agreed to forego their planned aerial spray and instead use the less risky (and lower volume and less drift-prone) backpack spray method instead, as the community had originally requested.

Therefore, given the immense challenges of today’s environmental advocacy and the efforts to protect our planet and its peoples from the excesses of difficult-to-change industries and governments, it is no surprise that environmentalists would look for additional value approaches that might have high potential for effectiveness. Traditional utilitarian, ecological, economic and public health approaches certainly do have their merits and advantages, but adding a human rights focus to the mix offers unique advantages from which other approaches can benefit.